The aim of this paper is to suggest a theoretical model for cell specialization.

We postulated that the specialization is acquired through two fundamental mechanisms:

A special kind of activation process is the “Brain Activation” process, as the function of the brain is not solely generating electrical impulses, but also mental processes.

Specialization of a cell

When studying a cell it is crucial to describe both its structure and function. These two components (that from this point are going to be called “structural component” and “functional component” respectively) have a high influence on each other. This is why when we see a specific structure we can deduce what functions it might have and also can imagine a structure that is specific for a certain function.

The structure of the cell is very stable after differentiation. An exception is represented by the gametes (the only cells in the human body that naturally undergo a reprogramming). The zygote is a totipotent stem cell (Dănăila, 2016) created by the reprogramming of the gametes. This process is the one that allows a new organism to be formed and is fundamental to life itself.

If we study the development of the zygote we will observe that the cells which are derived from this totipotent stem cell are totipotent stem cells themselves up to the morula stage. The term “morula” (Latin of mulberry) designates an embryo with a dozen or more cells present, but no blastocystic cavity (Muller and O’Rahilly, 1997).

During days 3-4 of development, as the cleaving embryo makes its way into the uterine cavity, fluid enters its centre, forming the “blastocystic cavity” (Dănăila, 2016). After the appearance of the cavity of the blastocyst the cells of the embryo lose their omnipotent character and become pluripotent stem cells (Hertig et al., 1954; Augustine, 2008) (Dănăila, 2016). The fact that the cells become pluripotent stem cells after the appearance of the blastocyst cavity leads to the conclusion that there is a mechanism that underpins this transformation.

As both the totipotent stem cells (TS cells) and pluripotent stem cells (PS cells) have the capacity of developing into multiple types of cells their structure is not yet well-defined. We can say that the cell has a well-defined structure after the anatomical component is definitively formed (the respective cell cannot become another type of cell by natural means). 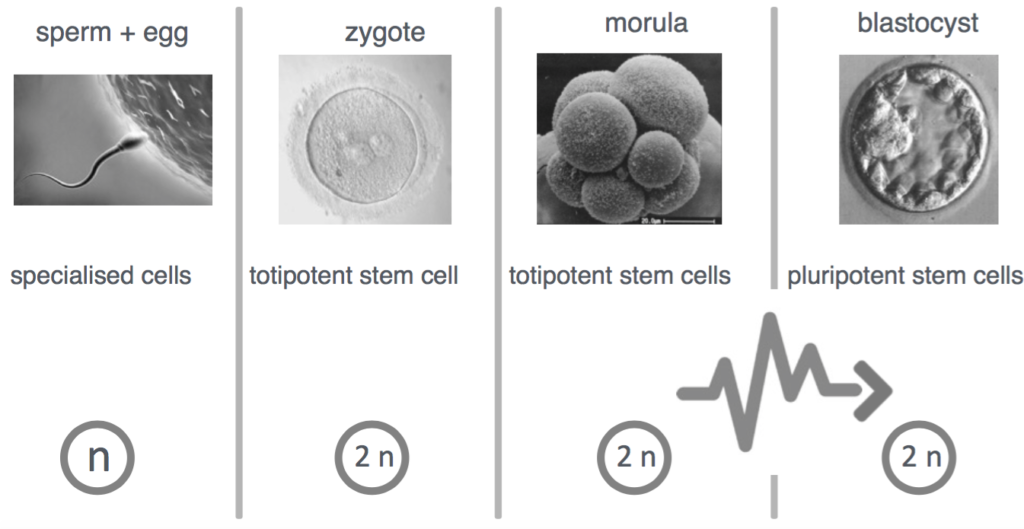 Fig. 1. Two haploid specialized cells (sperm and egg) give birth to the zygote (a diploid totipotent stem cell). From the morula stage to the stage of blastocyst the primitive differentiation determines the totipotent stem cells to become pluripotent.

Given the fact that when reprogramming a somatic cell in the laboratory the result is an iPS cell (that is more like the cells of the blastocyst and not of the zygote or morula), we can conclude that the primitive differentiation is practically an irreversible process (using the methods known today).

Cells that form from the zygote develop different anatomical components by differentiation processes which occur respecting the following fundamental principles:

1. Appearance of transcription factors.
It is thought to occur during the primitive differentiation (O’Connor & Adams 2010).

A growth factor can determine the formation of more than one type of cell by exposing the undifferentiated cell to different concentrations. To better illustrate this, we will use the example of neural induction:

The molecule Sonic Hedgehog (SHH) is secreted by the cells of the mesoderm. Cells of the ectoderm that are in the proximity of the mesoderm receive a high amount of SHH and will become glial cells. Cells that are farther away and are exposed to lower concentrations of SHH become motor neurons. An even lower concentration promotes the formation of interneurons (Brain Facts, 2012). Cells of the ectoderm which have not received the signalling molecules diffusing from the mesoderm become skin (Brain Facts, 2012).

Activation processes are specific to every kind of tissue.

In the first stage there are certain genes (HOXA2, HOXB1, HOXB2, LIM1, OTX2, FOXG1, FGF8, NKX2,1) that determine the synthesis of specific proteins by the means described earlier(Sadler, 2007). After this stage the brain is a functional brain.

The first stage of Brain Activation transforms a non-functional brain into a functional brain (Arimia, 2016). Given the cognitive and psychological components of the cortex, there must be a second stage of the brain activation process (this second stage can be called “cortical activation”). It occurs only in the neurons of the cerebral cortex and leads to a “fully functional brain” (a brain that presents superior nervous activity like abstract thinking and reasoning). After an activation process has acted upon a cell that cell is a specialized cell.

Surprised by the complexity of the brain and drifted by curiosity, student in the senior year to the National High School „Constantin Diaconovici Loga”, from Timișoara, Vlad Arimia wants to understand better brain`s processes and functions. He is learning with enthusiasm and big plans for the future, because he is firmly researching to clarify one enigma: the mechanism that determinate the existence of nervous impulses.

Due to the fact that he wanted to find a theoretical model, he succeeded in enunciate a hypothesis for a fundamental research. In 2016, he won a contest of National Scientific Works in Biology, for students, with his description of the neuronal activity. He hopes that his idea someday will be practical and it will succeed to restore normal functions to a brain-dead.

This work is licensed under a Creative Commons Attribution-NonCommercial-ShareAlike 4.0 International License.
Social Media: